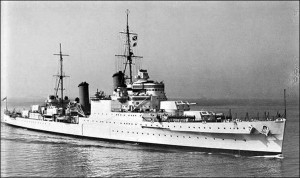 HMS Manchester lies off Tunisia in 85m of water – a team of experts explored it. Photography by Chris Simons.

THE LOOK ON THE FACE of the Jeepney driver at Tunis airport indicated that he had just realised what a half-ton of rebreather equipment and 10 burly Brits actually looked like.

The Jeepney was cosy, and with outside temperatures of 45°C, a little hotter than we were accustomed to.

In Kelibia our host, Selim, hit us with a bombshell. “Hi, welcome to Odysea Diving,” he said. “Our permit is suspended; there will be no diving on HMS Manchester this week.”

Our jaws dropped further as we heard that the previous week a trip to dive in the waters off Kelibia had been unauthorised, and that the consequence of this was that our own permit was suspended.

Our love affair with HMS Manchester had started some six years earlier, following a trip we made to Narvik. Chris had introduced me to Crispin Sadler, who had recently produced a TV programme about the wreck called Running the Gauntlet.

The Manchester, launched in August 1938, weighed in at 11,930 tons and was 180m long, and capable of a top speed of 32 knots. The wreck, found in 2002 by Simon Bennett, was the most intact British light-cruiser to be discovered anywhere in the world.

Crispin told me how, during World War Two, HMS Manchester had been involved with Operation Pedestal, a mission to supply the Maltese islanders with food and fuel. A convoy of 14 merchant supply ships had been assembled, protected by warships including three aircraft-carriers, two battleships and others split into two forces, Force Z and Force X, one of which contained the light cruiser.

However, when navigating through the minefields between Africa and Sicily, the convoy was ambushed by 15 German and Italian torpedo-boats lying in wait off Cap Bon, Tunisia.

In the early morning of 13 August 1942, Italian E-boats MS16 and MS22 torpedoed the Manchester on her starboard side.

With the vessel seriously damaged, Captain Harold Drew decided that rather than have her secrets, including her radar gear, captured by the enemy, she should be scuttled – a decision for which he was later subject to court-martial. At dawn, Manchester slipped under the waves, eventually settling on her starboard side in 85m.

By the time Operation Pedestal reached Malta two days later, the Maltese were down to their last few weeks of supplies. However, the operation successfully supplied the Maltese with 32,000 tonnes of goods, including enough fuel to last several more weeks.

After a number of anxious days waiting we were, thankfully, permitted to dive HMS Manchester. We had the use of Odysea’s boat, compressor and cylinders, and our nine-man dive team planned to use close-circuit rebreathers with a standard gas choice of 10/52 diluent and bail-out of 12/43 and 80%.

On our way to the dive site, we politely asked the skipper if he could shot the bow or the stern. Wiping a momentary “you’ll be lucky!” skipper’s smile from his cheerful face, he told us that his mark was for midships, but that it might just be possible.

In the big blue of the Mediterranean water, we felt huge thermoclines as we descended. The surface water temperature was 24ºC, the temperature on the wreck 14ºC. A bottom time of 30 minutes only added to the anticipation – there was no way to get around the whole wreck, but what could we see in the time?

At last the wreck appeared at about 60m, and incredibly the shotline was dropping to the seabed beyond the keel and just back from the bow!

Top banana, skipper – you were just being modest!

The shape of the port hull and gunwales became increasingly clear and sharp and so, excitedly, we headed over the gunwales and aft for A-turret.

Boy, this was one huge wreck!

Approaching A-turret, we noticed that the foredeck and anchor chains were all still there, but that the bow section seemed to have sheared off.

Our attention soon switched to the 6in guns, pointing straight ahead over the foredeck.

Our brains automatically accommodated for the list to starboard. Everything was intact and immediately recognisable – such a spectacle! Tony drifted slowly in and around the 6in barrels, and even at 70m-plus, sunlight shone over the portside gunwales.

Moving aft, the three 6in guns of B-turret point majestically forwards above A-turret, but are also directed a little to port, and almost skywards. Ian Smith and I hovered to take in the massive scale of the turret and guns.

It was staggering to note the detail in the armour-plating, and the fixtures remaining on the decking, although we also noted that the divers were beginning to kick up a little fine cloudy silt as they finned. Much as we wanted to linger to take it all in, we had to move on, and the bridge was beckoning.

WE PASSED OUR OTHER PHOTOGRAPHER, Patrick Vanstraelen, as he returned from midships. Then Manchester revealed her port bridge superstructure. At the top were the remains of the main gunnery range-finders and control, although the tripod mast that would have been immediately behind them appeared to be missing.

In front of the rangefinders was the exposed bridge area where Captain Drew and his officers would have stood in command of the ship. One deck below, the rectangular windows with their sliding glass panes were intact.

A porthole lay open, presumably as it was when Manchester sank.

Closer to the port wing of the bridge, Paul Flaherty inspected a gun in the foreground, while aft lay the remains of the turrets of 4in guns that made up the secondary armament of the ship.

Above these was a Bofors anti-aircraft gun, pointing skywards.

Paul then moved to examine the forward section of the open bridge, and found some of the glass-panelled spray- and windscreens still intact. Kieran then decided to inspect the front of the bridge a bit more closely. He looked into the wheelhouse, and later recounted seeing the telegraph and telemotor intact.

Twenty minutes had flashed by, so it was time to head back to the shot, though not without pausing to savour the sight of those B-turret gun barrels pointing skywards.

Some gentle finning brought us back to the port bow section, but with a remaining few minutes of bottom time, Kieran Barry took time to appreciate some resident damselfish that had made their home on the port-side hull.

AS WE SLOWLY ASCENDED the line towards the other divers ahead of us on the deco trapeze, there was plenty of time to reflect on this amazing dive.

There was more post-dive reflection once we were back on deck, Belgian diver Olivier Bertieaux suggesting that HMS Manchester was like a sleeping giant, partially opening an eye to take a peek at whoever could possibly be disturbing its sleep.

We were surprised at this rather romantic notion coming from a hairy-backed technical rebreather diver, but we knew what he meant.